Media of Live Performances
One For My Baby
"How could you ever get so close to Ol' Blue Eyes' version of 'One for my baby'?"
"Give Tyrone Mr. SuperFantastic a listen. He delivers the song... with a nod to its tradition and a fresh edge to its soul!"
Peach Reasoner
2011 Producer of the Year
LA Weekly Theatre Award: Hoboken to Hollywood

I'm Beginning To See The Light 0:49
At the Catalina Jazz Club 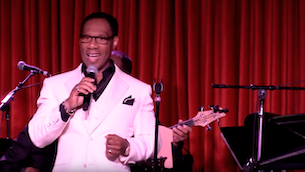 Fly Me To The Moon 0:55
A night of elegance at the Marina City Club!
Concert Photos
Many incredible memories with our fans at each concert. Check out our latest photos below.

Book Me
Contact me for bookings and other inquiries by calling me at (310) 266-2019. You can also email me by filling out the form below.

Reviews of Mr. SuperFantastic
The fans and critics alike are quite vocal about Mr. SuperFantastic. Check out some reviews below.
First of all, is the deep resonance in his voice that places it in the position to cut through the orchestration. This comes to the foremost readily in his engaging reading of “Mr. Bojangles”. It is a song that gets used currently as a punch line instead of correctly being noted as a deeply human song about people. The way Tyrone delivers it brings it back to its innocence and simple reason for being. Read More...

AnnieWay Reviewer, Sputnik Music
Both the lyrics and the instrumental transports you back to the 1950’s. The new included jazz makes the song more danceable but still enjoyable in its original qualities. Tyrone’s voice flows with the music and will make you want to melt into the music.
Read More...

Sasha Clinnin Writer, Audible Addixion
There is a confidence that seems to be born of experience meeting talent and study. Tyrone has been singing his music live for years. He is also knowledgeable enough about music to surround himself with some truly impressive sidemen, who have spent their lives playing and arranging for some of the best. Read More...

L. Ryder Writer, Playbuzz
Tyrone Mr. SuperFantastic has the kind of booming voice that if he’d been around in the long gone days of the Sinatra’s Rat Pack, well, they may have invited him to join them in the many VIP rooms they made their own. Read More...

Thomas Hendrix Reviewer, Musique Magazine
Mr. SuperFantastic brings back that big band jazz sound of yesteryear with a bang.... It Go Round In Circles" is a humble reminder for listeners of all generations that great songs never die, they go on forever. As Duke Ellington would say, it don't mean a thing if it ain't got that swing, so Tyrone Mr. SuperFantastic" stacks on the swing in every track. Read More...

Stevie B, Mia Mind Music
Tyrone Mr. SuperFantastic’s vocal approach while mellow and laid back is counterbalanced by subtle emotion and controlled passion. What serves this artist the most is his precise phrasing and unique style. These tools allow him to make each and every song his very own. Not an easy feat when you consider the wide range of the musical categories he’s presentingRead More...

Ralph White, Hot Indie News
"We're drinking my friend To the end of a brief episode So make it one for my baby And one more for the road"
Mr. Tyrone here nails the tiredness and bravado of the lyric perfectly. He understands the nuance of Frank Sinatra and he understands the nuance of being a good natural singer. He does not try and oversell the song. Something Frank was very good at as well. Read More...

This will close in 20 seconds